I have Mommy’s bridal shower scrapbook to look at before I pass it to my youngest sister for her safekeeping. She will be the keeper of the book and the Haviland china bought with the money Mommy’s groom sent his future mother-in-law. He wanted her to buy his ‘honey’ something for the shower. He was in the Army.

I’ve always thought of bridal shower games as fun and a bit silly. From word jumbles to designing toilet paper wedding gowns, the object is to have fun. No one has ever handed me a slip of paper and said, “Write a poem.” My brain would go blank – and I’m a writer. But within the pages of Mommy’s scrapbook are little slips of paper with poems written by the guests at her bridal shower. Actually, she wrote one, as well. Each of her sisters contributed as well as her close friends. They had five or ten minutes to come up with a poem. I’d say they did a super job. 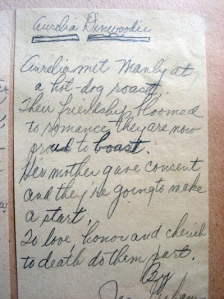 Some of the poems are quite good.

Aurelia met Manley at a hotdog roast;
their friendship bloomed to romance they are now proud to boast…
Her mother gave consent
and they’re going to make a start,
to love honor and cherish
to death do them part.”

They reflect the times.

Said she’d not be a W.A.A.C. or a W.A.V. E.
A S.P.A.R and neither a WOW
She’d rather feed chickens and hens
Or farm it behind her dad’s plough
When that soldier came out of the South
Oh oh should I shut my big mouth?
She forgot farm and family
And sings vow with Manley
“We’re in the army now.
I’m not behind the plough”.

And a few were funny.

Aurelia and Manley are going to wed-
“I bet they’ll be nervous” her mother said.
They’ll shake and they’ll shiver
Or get red as liver
And tremble from head to foot.
But as soon as it’s over-
They’ll be ‘sitting in clover’
When Manley gives her
— the – kiss!

My Aunt Yvonne wrote this last one.

These personal snippets of family history are windows into another time and place, shedding light on the lives of women celebrating a momentous occasion as they cope with the changes war brings to the home front.

I write romantic adventure for the inspirational market. I enjoy needlework, papercrafting and gardening. I'm at home in the Ocean State with my husband, son and a spoiled Belgian Malinois.
View all posts by anitakgreene »
← Denim Coaster
Hedgehog Inchie →