As I write this, we have electricity but many friends across the river in Connecticut are still in the dark. Here at the Greene house, we lost power early on but were prepared for the event. Old Roady and I are children of parents who experienced the 1938 Hurricane. My birth coincided with Hurricane Hazel. We grew up preparing for the next ‘big one’. That has always involved filling the bathtub with water. My parents had well water. No electricity meant no pump to bring water into the house and no way to flush the toilet except manually.

Two days before Irene I found out I didn’t need to fill the tub with water because my home is on city water and the city has generators that will keep the water flowing! Who knew! I didn’t fill the tub. But old habits die hard. Instead, five VERY large pails of water were lined up in the tub. Having potable water is always a good thing. In the aftermath of Irene, a boil water 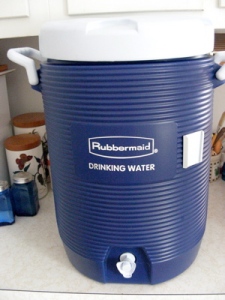 notice did go out in a few neighboring towns. Not that I would drink water from the tub, but I’d prefer to wash up in water that wasn’t crawling with some nasty bacteria. For drinking water, I filled all my pitchers and my Rubbermaid cooler.

In Rhode Island, if we are under a storm warning of any kind, it’s become a civic duty to run to the store and stock up on bread and milk. With the real threat of no power, I purchased several cartons of Parmalat milk. Found in the baking aisle, Parmalat is an UHT shelf-stable milk. Once opened, it needs to be kept cold. We have a generator, so chilling it wasn’t an issue. I wanted the milk in my pantry with my other canned goods in the event there was a total disruption in the supply chain and food shortages became an issue. Extreme of me? I don’t believe so. The local Shaw’s where Son works lost power and had to empty every freezer and fridge into the dumpster. Four days passed before they were back to full power and filling the meat and dairy sections as fast as possible. Fortunately, there were other options in town – this time.

Part of surviving a crisis successfully is knowing yourself. I knew I needed a project that would allow me to be productive while running from window to door to window keeping an eye on my neighbor’s trees. To take my gaze off them for any length of time would allow those leafy threats an opportunity to pull up their roots and fall on my house! So I took my extra craft supplies from the attic for a good sort and reorganization.

Did I mention my supplies were on the side of the house most vulnerable to those two marauding trees?

If my best efforts to hold off misfortune didn’t pan out, my totes filled with sewing and craft supplies could have ended up in the rubble. Were that the case, Old Roady would have leapt into the fray with chain saw, tarps and bungie cords in hand to rescue the house. I, on the other hand, would have been attempting to rescue quilt batting and buttons. So that my marriage would survive an Attack Of The Trees, I got the stuff out of the way before the pending battle. 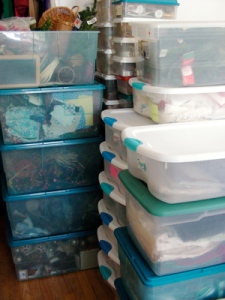 The trees stayed in place. A result of God’s grace and answered prayer rather than the power of my watchful eye. Our electricity was out for about a day. Cable TV and internet a little longer. We had lots of yard clean up to do here at home and for family and friends. Praise God for sparing us much worse conditions.

My heart goes out to the people of Vermont who have experienced devastation of epic proportion. From North Carolina to New England, people have lost loved ones, homes and businesses. Without power, businesses are unable to open – employees unable to go to work. A heavy blow in these hard economic times. The recovery will continue – months for some and years for others. An overwhelming prospect. But my God is bigger than the destruction and greater than the problems.

My prayers are with those who need them. How trite that sounds. But ‘the prayer of a righteous man is powerful and effective’. (James 5:16) In that promise I find hope and peace.

What special promise from God gives you hope?

I write romantic adventure for the inspirational market. I enjoy needlework, papercrafting and gardening. I'm at home in the Ocean State with my husband, son and a spoiled Belgian Malinois.
View all posts by anitakgreene »
← Previous Post
Welcoming Fall →